The visual media: They influence our lives more and more, shape our perception habits, control our expectations and provide patterns of action and perception. No wonder that all forms of sensual experience and communication have come under the sharpened eye. The relationship between people and space is also increasingly being questioned with regard to their qualities of experience. What and how does space communicate? Which atmospheres contribute to an ideal embedding of all functions into a sensual and emotional experience?

Of course – space can never NOT communicate: This has always been true for “normal” architecture and interior design. But the atmospheric, suggestive and narrative potential of design has been used to a very special degree for centuries in rooms whose main function is to support narratives: In the theatre (as stage design), later in film and television (set design), for some time now in game design and other forms of narrative communication. What used to be “set design” has been “concept art” since the development of product design in the film industry.

However, the special consciously adopted scenographic perspective is no longer limited to traditional theatrical or narrative forms of communication. In museum and exhibition culture, trade fair design, hotel and catering design, retail design and brand design, design is increasingly going beyond previously defined utility functions and unfolds powerful atmospheric communication and experience spaces whose visual and sensual density can and should fascinate.

Scenography is therefore at the forefront when it comes to a holistic, i.e. also emotional, view of the interaction between people and their spatial environment. Supported by the “spatial turn” of cultural and social sciences, scenography also always examines space as a construct and mirror of social relationships.

Our master’s focus topic “Scenography and Concept Art” not only wants to familiarize you with narrative, atmospheric and dramaturgical concepts of interior design but also to put them into practice during the idea and design process. Since it is also very much about communicating atmospheres, above-average acting skills are a great advantage. With your focus project proposal, you can introduce and develop a topic from the fields of theatre, film, graphic novel, concept art, museum/exhibition, retail design or related areas.
This master’s focus topic aims to make the special scenographic perspective also usable for conventional interior design and to help you gain unique selling propositions in the entire field of interior design. 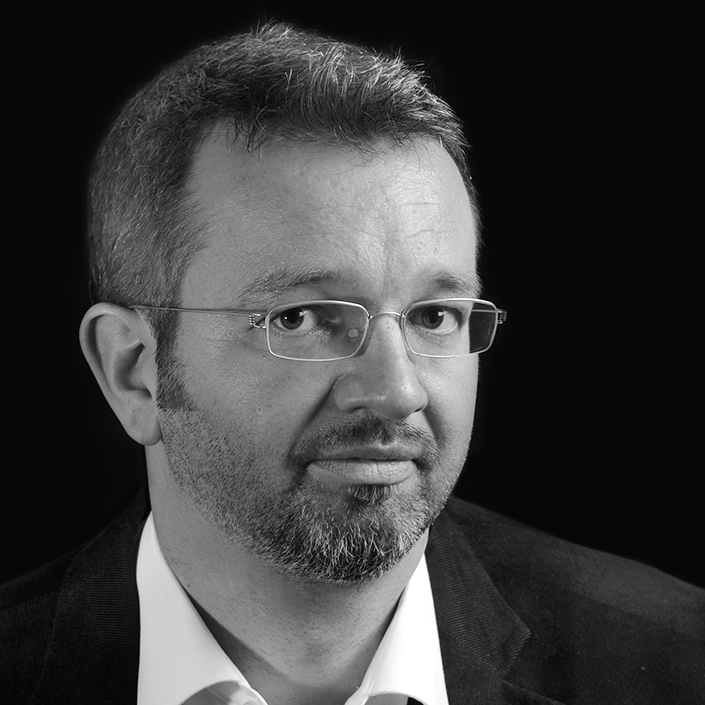 Spatial geometry, rhythm and tectonics: the cornerstones of atmosphere

Using a fictitious film scenario with certain functional specifications (grand hotel, function rooms), you will link functional considerations with perceptual psychological and atmospheric considerations. Which emotional effects should be created when opening up space by using it, by crossing it? How can I qualitatively shape the movement of people in space? They combine research, conceptual and floor plan work with spatial sketching techniques and development in increasing detail a coherent spatial scenario that no longer shows arbitrariness, but rather contributes trenchant statements to the film plot.

The derivation of floor plans and elevations from the sketch, the construction of a white model, the determination of texture and colour and then transfer into a digital model complete the sketch stage to a complete design portfolio. 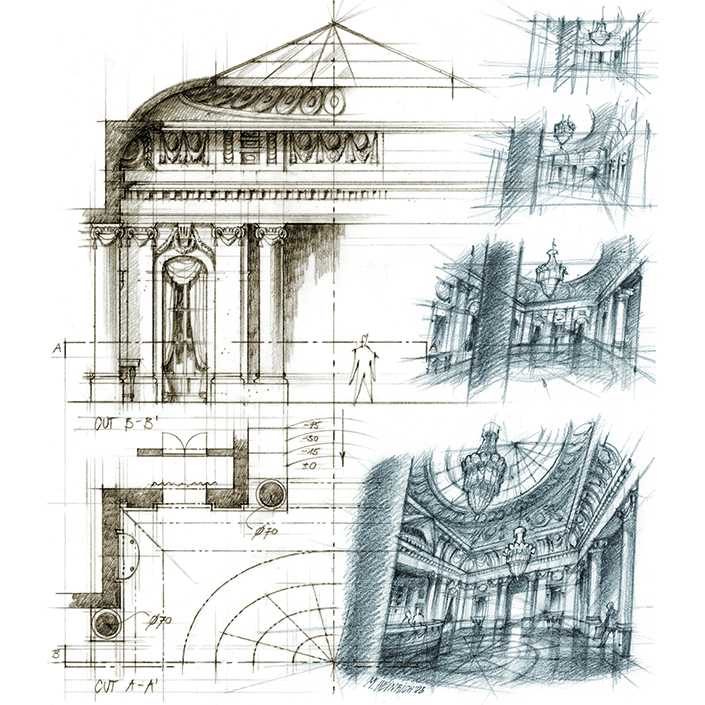 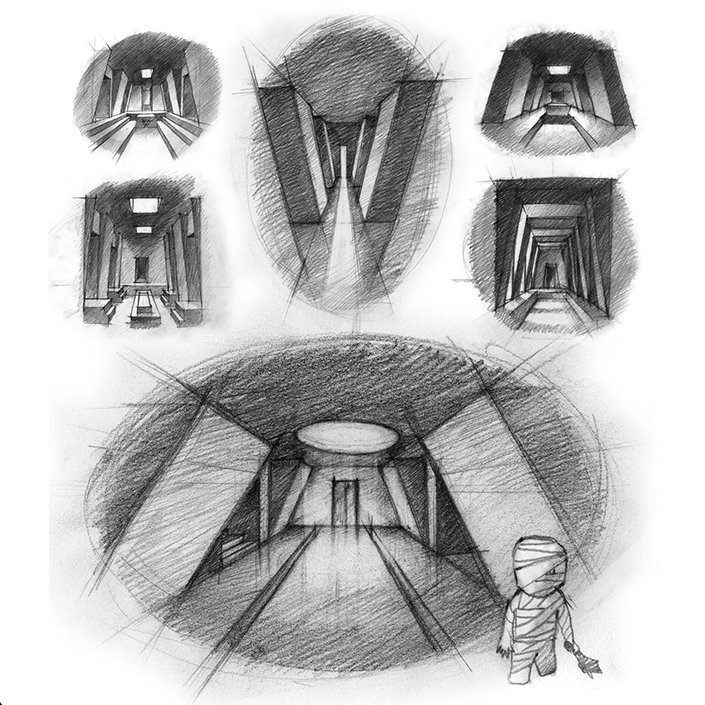 Based on a fictional film scenario with certain functional and atmospheric specifications (mummy’s tomb as a set design for adventure films), you will explore spatial geometry, rhythm and tectonics as fundamental aspects of spatial effects. By learning and applying various methods of consistent line and hatching techniques, you will lay the foundation for developing your own graphic handwriting or advance it to professional uniformity.
You will experiment with the representation of viewing angle, the incidence of light, light distribution in the room and logical contrast formation. You will discover the variety and expressiveness of the pencil/graphite pencil drawing tool.

Depending on the starting point, the spatial formation found can be further developed: The derivation of ground plans and elevations from the sketch, the construction of a white model, the determination of texture and colour and then transfer to a digital model complete the sketch stage to a complete design portfolio.

You will learn to link basic concepts of suggestive spatial representation and to apply them intuitively: Perspective/angle of view, contrast formation, line guidance, proportion and rhythm and light distribution must be defined purposefully and consciously in order to be able to create professional and safe sketches with liner and marker.
As a development tool and indispensable preliminary stage for any further detailing and concretization of spatial concepts, your ability to communicate with suggestive sketches is an indicator of your qualification as an intelligent designer who knows what he wants. 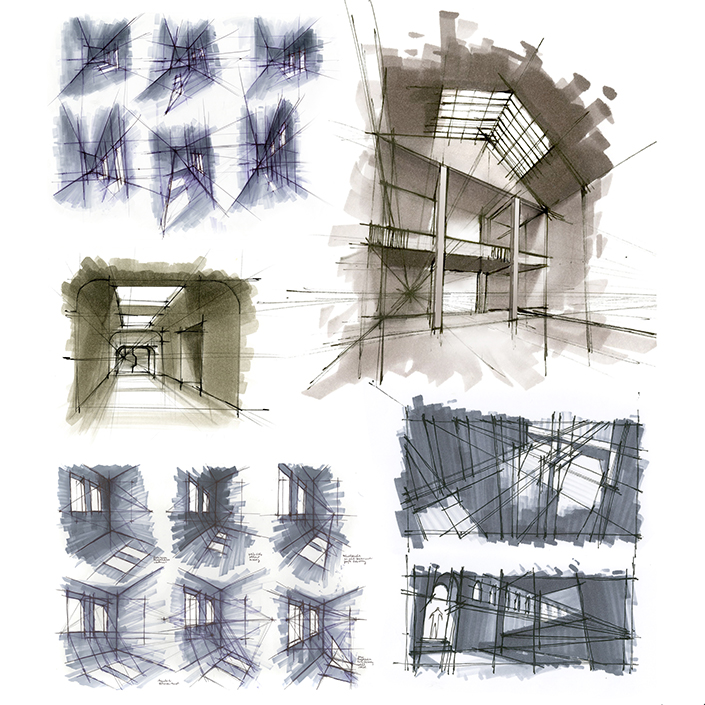